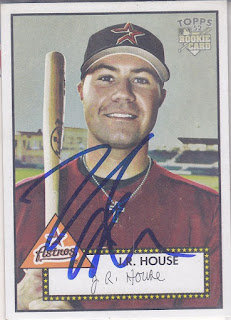 Here is the second card of JR House that I have to post. The last one was posted over two years ago, yet this card was signed at the same time as the last. Like quite a few of the recent cards I have posted, this card was signed between games at a doubleheader in Des Moines, Iowa in 2009 while JR was playing for the Omaha Royals.

Since the last JR post, he has spent some time in AAA and the Atlantic League. 2010 was split between the Buffalo Bisons and the Newark Bears with the majority of the time being spent with Buffalo. Last season was spent entirely in the Atlantic League with the Long Island Ducks and he hit .305 with 19 home runs and 81 RBI over 113 games. I know it is just the Atlantic League, but that still sounds like a really good season to me.

I can't find any info about JR playing anywhere this year, so it will be interesting to see if he turns up. The official minor league site lists him as on a Venezuelan winter team and that is about the only info I have found on him. I checked all of the Atlantic League rosters and did not see him on there. I did see some interesting names, though.
at 10:24 PM

J.R. House retired and accepted a job as the hitting coach for the Missoula Osprey, the Arizona Diamondbacks' team in the Pioneer League.

Lovely cards i wish, i could have some of them.
Clear Business Cards
Scratch Cards
Printed Gift Cards