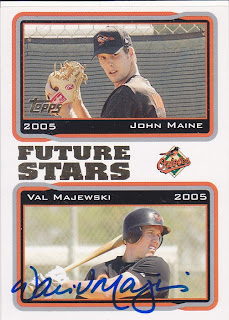 Here is a card that I got signed at a Tulsa Drillers game last season. Val was playing for the Midland Rockhounds at the time and I was able to get him to sign this card right before the game started.

I actually picked this card up from a garage sale a couple of years ago. A buddy called me up to let me know he found a garage sale that had some baseball cards. I had nothing better to do, so I decided to head over there to see what it had. The guy that was selling the cards didn't know much about them. He just picked them in bulk to try to flip for a profit. Almost everything was from 2006-2008 and all of the decent cards were way overpriced. He did have an "eight cards for a dollar" bin, though, and that is where I found this card. The reason I bought it was because I had the chance to get an autograph from Val the season before, but I didn't have a card of him. So, I picked this one up with the hopes that I might some day run across him again and that obviously happened last summer.

Val used to be a highly touted Orioles prospect. He made his Major League debut for them in 2004 and played in just nine games before tearing his labrum. The injury caused him to miss all of 2005 and, from what I can tell, Val has not been the same player since.

Val has started each of the past three seasons in the Atlantic League, but he has caught on with an affiliated team each season. It doesn't look like he is playing in the minors right now, so it may be back to the Atlantic League again this season.

John Maine is playing for the Colorado Springs Sky Sox this year and I am trying to work out a date to go check them out. Hopefully he will still be there if I ever make it and I can add his signature to this card.
at 4:57 PM

Good luck finishing off that card.

I remember Majewski in the Atlantic League - he had too much talent to play in the league, but he usually gave the impression that he felt he was too good to play there.