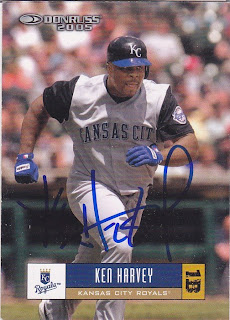 Here is a card that Paul, from Paul's Random Stuff fame, got signed for me at an Atlantic League game two years ago. Ken was playing for the Southern Maryland Blue Crabs at the time.

Ken's Major League career lasted just parts of four seasons. But in that short time span (271 games), Ken did two things that I will never forget. The first is that he made the American League All Star team in 2004. Carlos Beltran should have been the Royals representative that year, but he was traded to the Astros shortly before the All Star break. Since the Royals had to have an All Star, Ken got the nod based off of his .330 batting average.

The second, and more memorable, memory that I have of Ken is his walk off home run at Kauffman Stadium in 2003. The Royals were in the midst of their great 16-3 start that would pad their division lead through the All Star break. On April 18, the Tigers visited the Royals for the second home stand of the year. The Royals were 11-3 at that point and 38,937 fans showed up for the game. It was a tightly contested game that was tied 3-3 after nine innings of play. The game dragged on into the 11th inning with neither team looking like they were going to end it anytime soon. But, Ken led off the bottom half of the inning and hit an 0-2 pitch for a home run to win the game. There were still at least 30,000 people at the game and the house was rocking. To this day, that is still the best Royals game that I have ever been to.

Here is my lasting memory of Ken Harvey. 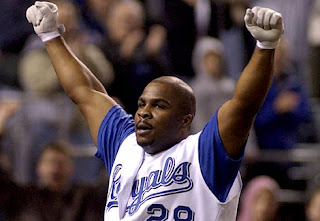 Unfortunately for me, I was more into tailgating at that time than getting autographs. So, this is the only signature from Ken that I have. Thanks Paul!
at 6:22 PM