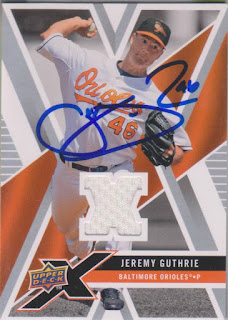 Remember this craptastic set? It was a one and done from Upper Deck and that was a good call by them. They seemed to be making a quite a few one and done sets around that time. It is kind of funny now because this set sort of reminds me of this year's Topps Fire set, which I have yet to buy any of.

This is the second card of Jeremy Guthrie that I have posted on here. But, since this is the only card from this set that I have signed, it gets its own post. And I am okay with that because it is a relic card and I like Guthrie. I posted his first card four years ago and it can be seen here.

J-Guts pitched for the O's for five seasons and had double digit wins in four of those seasons. Unfortunately, he also had double digit losses in each those four seasons and lead the league in losses twice, with 17 both times. So, he finished his stay in Baltimore with a 47-65 record with a 4.12 ERA and 602 strikeouts.

As much as I do not like this set, this card actually look really good signed. It looks slightly better than the '04 Topps Total card that I posted first and that is usually a great set for getting signed.

I got this card signed at Royals Fanfest in 2014.

It only took me eleven months to make it through the 265 cards from 2008 that I have signed. Considering that I only posted 154 times this year, I think I did alright. Now, it is time to hit the rewind button and start posting all of the older cards that I have got signed since then. It should go by fairly quickly until we get to '81 Donruss. Then, it might take me an entire year to get all of those cards posted. The next month, however, is going to be nothing but cards from the '50s. So, if you like vintage cards, keep checking back through Christmas.
at 11:15 AM