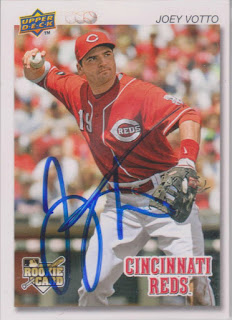 Back in the day, Joey Votto was a TTM machine. But, he stopped signing through the mail in 2012. Luckily I was able to get him when the getting was good in 2009. I sent this card to the Reds Spring Training facility and I had it back about three weeks later.

I really like the card that I picked out to get signed. Sure, he Allen & Ginter rookie card would have looked fantastic. But, I really love the nostalgia of this card with its 1992 feel.
at 8:54 AM