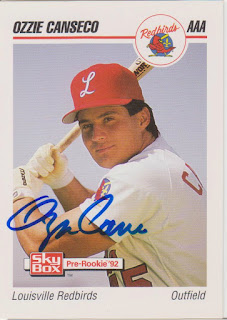 Here is the fourth card of Ozzie Canseco that I have to show on here. Ozzie was the hitting coach for a season and a half with the American Association's Sioux Falls Canaries. The four cards were signed on two separate occasions at Wichita Wingnut games.

Ozzie had a few minor league cards that were available in packs, but this is the only one I have. It comes from the Skybox set that looks nearly identical to the Line Drive set from the previous year. How or why the two sets look nearly the same is unknown to me. I do know that I have very few of the Skybox cards, so I probably wasn't very impressed with the copycat look.

Ozzie was released by the A's after the 1990 season. He went to Japan in 1991 (though I can find no stats for him) before coming back to the States for the 1992 season. He spent most of '92 in Louisville and he hit 22 home runs for them, the most he ever hit in a single season at any level.