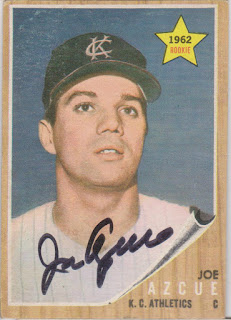 It's that time again! It's time for another in-person autograph! It has only been four posts since the last in-person graph, but with all the TTMs dominating my posts, it seems like it has been an eternity.

I got this card signed at the same time as the last in-person auto. That was at the Royals annual Negro League game and I was lucky enough to have cards for three of the gentleman that were signing that day. Though Joe never played in the Negro Leagues, it was still cool that he was there to commemorate the event.

This is actually the second card of Joe that I have posted on here. I posted the first one six years ago after getting it signed at a Kansas City A's event that was hosted by the independent Kansas City T-Bones. That card can be seen here.

Joe played in the Majors for eleven seasons with the Reds, A's, Indians, Red Sox, Angels, and Brewers. Playing with those teams in the '60s and early '70s, he never played in a postseason game. But, he did make one All Star team as a member of the Indians in 1968. That season, he hit .280 with 4 home runs and 42 RBI. He got one at-bat in the mid-summer classic and he struck out against Tom Seaver.

This is a funky photo of Joe. The A's never wore pistripes, so it is obviously airbrushed. He played for the Reds in 1960, so maybe it is a Reds uniform he is wearing.
at 10:24 AM