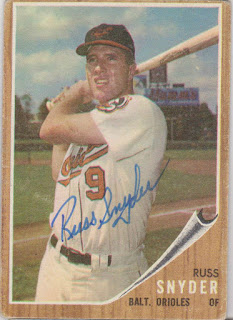 Here is the second of two cards that Russ Snyder signed for me through the mail in 2014. I posted the first card last month and it can be seen here.

After just two seasons in Kansas City, Russ got traded to the Orioles and he went on to spend a majority of his career in Baltimore. He played there for seven seasons and did well as an Oriole, hitting .280 with 26 home runs and 189 RBI. His best season was with the O's in 1966. That year, he hit .306 with 3 home runs, 21 doubles, and career highs in runs (66) and RBI (41). Snyder's career year contributed to a spectacular run by the Orioles that culminated with a sweep of the Dodgers in the World Series. Russ was 1-6 with a run and an RBI in the series.

After the '67 season, Russ was traded to the White Sox. He played there for just one season before spending two seasons in Cleveland and then his final season in Milwaukee. For his career, Russ was a .271 hitter with 42 home runs and 319 RBI.

I believe that this is my oldest signed Orioles card.
at 2:01 PM