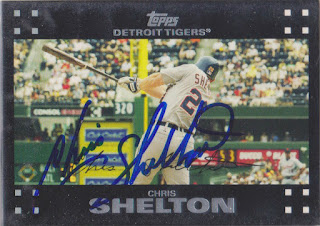 Here is a card that I got signed at an Oklahoma Redhawks game in 2008. Chris, who played for the Redhawks, was nice enough to sign the one card I had of him before the game started.

Chris spent parts of five seasons in the Major Leagues and he put up some real decent numbers in Detroit in 2005 and '06. In '05, he hit .299 with 18 home runs and 59 RBI, all career highs. His numbers dipped just a bit the next season, but the still hit .273 with 16 dingers and 47 RBI. Then, in 2007, he did not make the Tigers roster out of Spring Training and spent the entire season in AAA. The tigers traded him to the Rangers after the season was over and that ended his tenure in Detroit.

Chris got called up to the Majors a couple of times with the Rangers and Mariners, but failed to have any significant impact. After hitting 35 home runs as a Tiger, he would hit just two more outside of that organization.

As far as I can remember, there are not very many horizontal cards in 2007 Topps. This is the only horizontal card from the set that I have got signed and it is the best-looking one by far.
at 10:34 AM