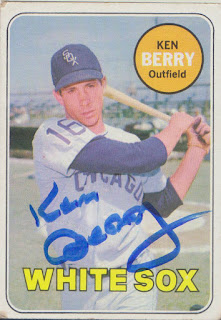 Here is the second card that I got signed by Ken Berry at the Wichita card show last year. I posted the first card of Ken almost a month ago and it can be seen here.

When I met Ken, I was surprised to find out that he is now an author. He has done a handful of children's book and recently completed his first novel, "Twin Snipers". He had some of his kids books at the show and was promoting his novel that had just come out. Ken was excited about the novel and gave me a synopsis, which was pretty cool.

I did not have any cards of Ken to get signed before the show, so I picked up three of them there. One was his '67 Topps card that I had already got signed through the mail a few yeas back. When I was standing in line, the dealer that hosts the show had a few other cards of him. I thumbed through them and found a couple of cards from the '70s that I wanted. He told me that those were four dollars each. I laughed because I thought he was joking, but he was not. So, I set them back down and stuck with my three cards from the '60s that I paid a dollar each for.

Ken's signature is made for ballpoint pens, not worn out Sharpies.