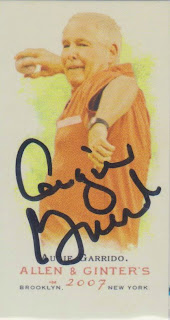 FINALLY!! Here is the first card that I have to post from 2007. I was beginning to think that I would never make it here.

This is a card that I got signed at a Kansas State baseball game in 2010. Augie is the long-time coach of the Texas Longhorns. It was an interesting experience getting this card signed as Augie would not sign before the game. Then, the game ended on a bang-bang play at first, killing the Longhorns rally. Augie went out to argue, but to no avail, and the game was over. So, he obviously wasn't in a very good mood after that, but he went and did his interview with the Texas media on-field. He was right in front of the dugout, so I went down there to wait and try to get my cards signed. While I was just standing there, the K-State security guard by the gate opened the gate up and let me on the field. It was a little awkward, but Augie just grabbed my book and signed my three cards while he was doing his interview.

That was the only time I have ever been on the actual playing field to get a card signed. I wish I could do that more often as it would make it a whole lot easier for me.

Augie has been the head coach at Texas since 1997. In that time, he has lead the team to eight College World Series appearances and they won it all twice. Prior to that, he lead Cal State Fullerton to three CWS championships. He was been named National Coach of the Year five times and he has the most wins by any college baseball coach at any level.
at 2:27 PM

His teams at Illinois were fun to watch.