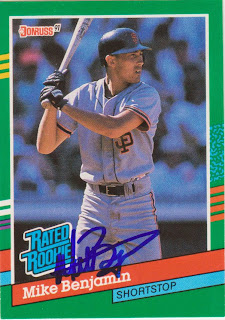 Here is the first of two cards that Mike Benjamin signed for me this past spring. Mike is the assistant coach for the Arizona State baseball team and I was able to get the cards signed at one of their home games on this years Spring Training trip.

When we were planning out trip this spring, I always look for ways to maximize the amount of games that we go to. That is for my benefit, not the rest of the family's. Since most of the spring games are day games, it is hard to book two games in one day. Because of that, I will check Arizona State's schedule to see if they can help me out. This year, when I saw they were playing Wichita State, I knew we had to go. So, I went to a A's at White Sox game during the day and then took the family out for a WSU/ASU game that evening.

Plus, this season was the final one that the Sun Devils played at Packard Stadium. I believe that it is being torn down for possibly more parking. As a fan of ballparks, it was a no-brainer to go to the game, even if it did cost more than the White Sox game earlier that day.

I got a couple of cards signed by Mike four years ago when the Devils were in Omaha for the College World Series. I mentioned in that post that I was able to find Mike because he was sporting mutton-chop sideburns. I am happy to say that those things still grace his face.

Speaking of the College World Series, I got back from my weekend in Omaha yesterday. Despite my tent getting knocked out of commission by a cottonwood branch, I had a great time and came home with some nice prizes. I haven't decided if I am going to show them all at once or post them one by one over the next few days. Either way, I hope to have some sort of glimpse up tomorrow evening sometime.
at 11:31 PM