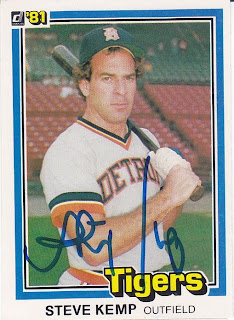 Tiger appreciation week continues with Steve Kemp, the third straight Tiger I have posted on here. Like the last two, this one was obtained through the mail. I sent this card, and three others, to Steve in November, and they all came back signed about a month later.

I am pretty sure that this is the first, and only, time I had ever sent out four cards to the same person in the same request. I usually just send out one, but will occasionally send out two. Sending out three is rare for me, but not unheard of. That is usually where I draw the line. But I ended up finding three cards of Steve, besides his '81 Donruss card, that I wanted sign, so I said what the hell. I made sure to check SCN before I sent the cards out and Steve is a very generous signer. Because of that, I wasn't too worried about losing any of the cards.

Steve played in the big leagues for eleven seasons. He started out with Detroit and he had his greatest success there. He was their everyday leftfielder for his first three seasons in town and 1979 was the best season of his career. That season, he had career highs in average (.318), home runs (26), and RBI (105). He made his lone All Star team that season and was named the Tiger of the Year.

For such a short name, Steve sure has an interesting signature.