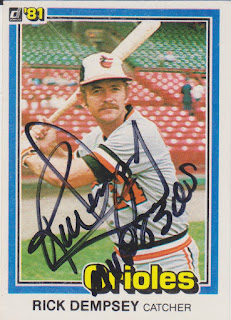 Here is the card of Rick Dempsey that I got signed through the mail in 2014. I sent this card to Rick in April of that year and got it back four months later. It was a longer wait than most cards I get back from retired players, but it made it back and that is all that matters.

Rick made his debut with the Twins in 1969. He would play in just a handful of games with them before being traded to the Yankees before the 1973 season. He played in New York for three and a half years before being dealt to the Orioles in a massive ten player trade. After a couple of seasons as the O's backup catcher, Rick became their primary catcher in 1978 and would stay in that role through the 1986 season.

Over that time in Baltimore, Rick hit .238 with 75 home runs and 355 RBI. He caught two World Series for the team and, as you can see by the awesome inscription he added to the card, he was the MVP of the 1983 World Series. In that series, Rick hit .385 with with all five of his hits going for extra bases.