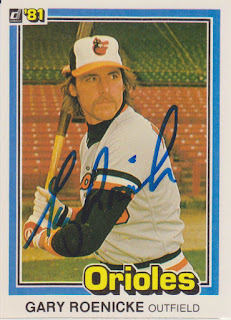 Back-to-back Orioles! Here is another member of the O's 1979 and '83 teams that played in the World Series, winning it all in '83. Unlike Rick Dempsey from yesterday's post, who was the '83 World Series MVP, Gary played less of a role for that team. He played in just three games of the five game series and went 0-7.

Gary played in the Majors for twelve seasons with the Expos, Orioles, Yankees, and Braves. The majority of that time was spent in Baltimore where he could man all three outfield positions. With the O's, Gary played in 850 games and hit .250. 106 out of his 121 career home runs came in the orange and black. His best season was probably his 1982 season. That year, he had career-highs in average (.270), doubles (25), and RBI (74).

I sent this card to Gary in November of 2013 and I had it back about two weeks later.