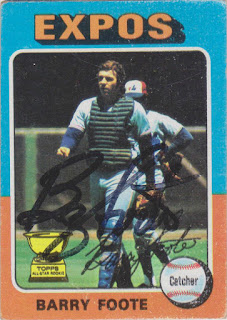 Here is the second card of Barry Foote that I got signed through the mail in 2013. I posted the first one, his '81 Donruss, not long after it made it back home. The two cards took Barry ten days to get back to me.

While this card is not the best card to get signed because of the dark background, it does have two things going for it. The first is that it is from the '75 Topps set and the second is that it has a Topps Rookie Cup. I am not sure when Topps switched from the trophy to the cup, but this has got to be my oldest signed card with the actual "cup" on it.

Barry earned that Rookie Cup that year by hitting .262 while driving in 60 and hitting 23 doubles and 11 home runs. On top of that, he lead the league in sac flies and assists by a catcher. Those 60 RBI and his .262 average would end up being career-highs for him.

Barry went on to play for eight more seasons after that with the Phillies, Cubs, and Yankees. After leaving Montreal during the '77 season, he was mostly relegated to back-up duty. The one exception was with the Cubs in '79. He played in 132 games for them that season and hit a career-high 16 home runs.

Barry finished his career a .230 hitter with 57 home runs.