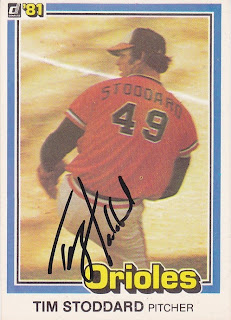 Here is the Tim Stoddard card that I got signed in Wichita last spring. Tim is the pitching coach for Northwestern and I was able to get three cards signed by him when the Wildcats visited Wichita State. Unfortunately, I was unable to watch the game as it was the Wingnuts home opener that night. So, I stopped by there, bought a ticket, got my cards signed, and then left. It wasn't the most efficient use of my money, but I was able to add another '81 Donruss card to my collection. Plus, I was able to do it in-person, which is becoming harder and harder with this set.

This is one of the more unique photos that I have seen in this set. It reminds me of some of the pictures I have taken at big league games. The photographer is positioned a little higher than the player, like the picture was taken from the stands. It looks like Tim is warming up in the bullpen which is a nice change from most of the posed shots.

Tim is a big guy (6'7") and he makes those numbers look a little under-sized on his jersey. And at the angle the photo is taken from, the name on the jersey almost looks like STOOOARO.