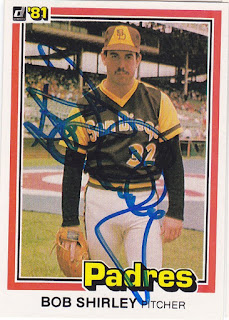 Next up is the Bob Shirley card that I got signed through the mail. I sent this card to Bob's Oklahoma home in November and I got it back just over a month later.

Bob pitched for the Padres, Cardinals, Reds, Yankees, and Royals in his eleven season Major League career. He came into the league predominantly a starter in 1977 and he eased into the bullpen, with a few spot starts, as his career progressed. He had double digit win seasons twice in his career, though he lost more games than he won both times. He saved 18 games throughout his career, with a season high of 7 with the Padres in 1980, and he struck out 100 or more batters for three straight seasons to start his career. Bob was 67-94 with a 3.82 ERA when he retired after the 1987 season.

Game one of the CWS finals is in the books with UCLA winning 3-1. UCLA needs to lose tonight and win tomorrow to have a decisive winner in the contest. If they win tonight or lose the next two, we are going to have to go to the tie-breaker.