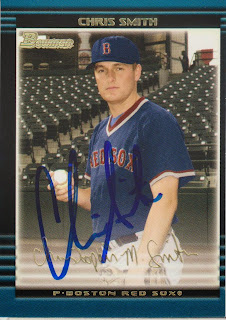 Here is the third straight card of a former Wichita Wingnut. This one is of the former Red Sox and Brewer, Chris Smith. Surprisingly, with such a common name, only one other Chris Smith has ever played in the Major Leagues. This Chris Smith signed three cards for me before a 'Nuts game in 2013.

Chris was drafted by the Sox in the fourth round of the 2002 draft out of UC-Riverside. He progressed up the organizational ladder and made his first stop at AAA in 2006. He spent most of the time at that level in 2007 and 2008. But, he did get the call to Boston in '08 and made his debut in June. He got called in to the second inning in a game against the Cardinals. Diasuke Matsuzaka got roughed up in the first inning, and was walking people in the second, so Chris was in for damage control. He pitched four innings and gave up three hits, one run, and had three strikeouts. The homer he gave up was a grand slam to Troy Glaus, but all three base runners belonged to Dice-K. It was smooth sailing after that.